Why Courage Is Worth Its Cost

Why Courage Is Worth Its Cost

It simply requires making yourself available and being willing to obey.

And it is ALWAYS worth it.

Some of you may think that you are the most unlikely candidate for God to use to do anything significant.

Most of us think of ourselves in that way.

The world teaches us that it is the rich, the powerful, or the beautiful who are important and make a difference in the world.

That’s not what God teaches. He doesn’t think or work the way the world does.

I like the way Randy Clark puts it: “God can use little ole me!”

God can use anyone or anything He desires to accomplish His purpose.

In fact, He prefers to use people and means considered insignificant by the world. The apostle Paul told the Corinthians:

If you still wonder whether or not God can use you, take courage from the story of a young woman who was one of the most unlikely heroes in history: Joan of Arc.

Her life has been a tremendous tool of inspiration to me.

Joan of Arc: A Time for Leadership

The fourteenth and fifteenth centuries were filled with great political and national turmoil for France.

From 1337 to 1453, France and England fought a series of battles that became known as the Hundred Years’ War.

Around 1400 an ancient French prophecy was revived that said the kingdom would be brought to ruin by a woman and restored by a daughter of the people.

Many came to believe that Queen Isabella had fulfilled the first part of the prophecy when she signed the Treaty of Troyes, giving the French throne to an English king.

But who would be the “daughter of the people” who would arise to restore the kingdom?

The people of France were in a desperate state; children died of hunger in the streets by the thousands. It is said that wolves even came into Paris at night to feed on the bodies of the unburied dead in the city streets.

There was great lawlessness and immorality, and many people lived little better than beasts.

The disinherited Charles, from his base in central and southwestern France, attempted to assert his authority and claim to the throne, but with little success.

The French people as a whole would not recognize him as the legitimate king unless he was formally coronated in the traditional place, the cathedral in the now English-controlled city of Rheims.

If ever there was a time for a strong and courageous leader to arise, it was now.

In the midst of this political unrest and social upheaval, Joan appeared.

Born in 1412 in the village of Domremy, in the Champagne district of northeastern France, Joan was the youngest in a family of five.

Although skilled in sewing and spinning, she never learned to read or write.

From a very early age she displayed an unusually deep devotion to God. She spent hours absorbed in prayer and was known to have a tender heart for the poor and needy.

From her childhood on, Joan simply loved God.

She never received any theological training and knew very little about the formal structures and official doctrines of the Roman Catholic Church, the only church in France at that time.

All Joan knew was that when she went to mass, God met her there.

Joan knew God, loved to spend time with Him, and would do anything for Him.

In the summer of 1425, when she was thirteen, Joan experienced her first heavenly visitation: a blaze of bright light accompanied by a voice.

She received numerous such visitations during the months that followed.

During this time, she gradually became aware of the call of God on her life.

He seemed to be telling her that she was to go to the aid of the disinherited Charles, the true king of France; drive the English away from Orleans and out of the country; and lead the procession to see Charles enthroned.

At first, she resisted: I’m just a girl. I have no education, no training in military skills. Who’s going to listen to me?

By May 1428, Joan was convinced beyond a shadow of a doubt that God was leading her to go to Charles’ aid.

She believed that God was true and that He would back her up in everything that He called her to do.

After passing numerous tests placed upon her, Joan’s faith, simplicity, and honesty made a very positive impression onKing Charles, his court, and later, even a large committee of highly educated bishops, who found nothing heretical in her claims of supernatural guidance.

An Army of the Lord

Joan had such an incredible presence of the Lord on her that she drew people to her everywhere she turned.

By the time she arrived on the battlefield, Charles’ army was at a very low point; they were exhausted, defeated, discouraged, and disillusioned.

Many of the soldiers had begun to desert.

Then Joan appeared, proclaiming, “I have a vision from God. He has called me to raise an army for our nation and for Him.”

As Joan’s presence became known, soldiers began to rush to her side by the thousands.

The call was given, and they came gladly.

Rough, vulgar, immoral, and intemperate as many of them were, the men found her innocence, spiritual piety, and patriotic fervor irresistible.

Her presence filled them with new vigor and courage.

She held up for them a standard of righteousness, purity, and devotion to the Lord, and they rallied around her.

Even though she was a young woman in the midst of an army of men, Joan had a holy quality about her that blocked their tendencies to regard her in a sexual manner.

Joan had absolutely no training in military operations or strategy, but God gave her battle plans on the field.

Under Joan’s leadership, the French ultimately captured the city of Troyes, opening the way to Rheims where, on July 17, 1429, Charles VII was solemnly crowned king with Joan standing by as a witness.

This fulfilled the words that she had prophetically declared in a letter three months earlier, that Charles would be crowned king before the end of the summer.

Later, she was captured by the English, tried for heresy, and burned at the stake.

Joan faced the flames fully conscious. As the flames rose, she called out for the cross.

When it was held up before her, she called repeatedly on the name of Jesus, forgiving those who had wronged her and pouring out words of love and devotion to Him.

Walking in Joan’s Legacy of Courage

What does the life of this fifteenth-century teenaged girl have to say to us today? 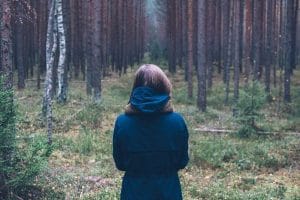 We can take courage from the simple fact that Joan was so ordinary.

There was nothing obvious that made her stand out. By normal human standards she had no qualifications for the mission she undertook.

She had no education, no religious training, no leadership experience.

She was not ordained to the ministry. In fact, she lived during a time when women’s freedom in both church and society was greatly restricted.

What made the difference?

Joan possessed the only qualification that mattered: she loved God with all her heart, soul, mind, and strength.

She was completely sold out to Him.

God chose her and used her because she made herself available to Him.

Her executioner claimed that her heart would not burn. If this was so, perhaps it was because her heart had already been burned by her passion for God.

She was so consumed by Him that nothing else could touch her.

We can all take courage in this—the only thing God requires of us in order to be used is that we know Him, love Him, and make ourselves available to obey Him.

I’m available and ready to obey, how about you?

Rising Up in Courage!

This article is adapted from Chapter 3: “Joan of Arc: The Cost of Courage” in the Heroines of Faith book by James W. and Michal Ann Goll. 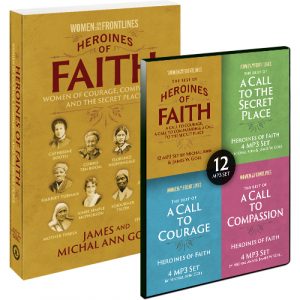 If you want to activate your faith and grow in courage to obey God’s call on your life, then you’ll love the Heroines of Faith Bundle by James & Michal Ann Goll! Save 26% when you purchase this bundle of the Heroines of Faith Book & The Best of Heroines of Faith 12 MP3 Message Set! You’ll be inspired by the true stories of twenty-seven women who forever changed the world through their courage, compassion, and devotion to the secret place. They overcame fear to become strong in faith, took God’s unfailing love to the world, and passionately pursued the prize of God’s presence. Order your bundle today and receive faith to be used by God!