Israel is once again on display before the eyes of the world.

The board has been set and the pieces are moving. Throughout the ages, it seems as if God has been waiting for His strategic moment. He is positioning His intercessory knights and prophetic bishops together for a sweeping move—one that all the world will observe closely. No eye will miss the mysterious and fascinating day on God’s prophetic calendar when He once again steps into the world of space and time. It is time for the unveiling of the mystery of Israel as the apple of God’s eye (see Zechariah 2:8), the crucial piece on God’s chessboard. 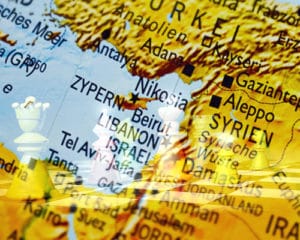 Although modern Israel is only a little over seventy years old, the Jewish nation is actually one of the oldest on earth. These people and their land reach back to the time of Abraham’s prophetic pilgrimage and the covenant promise of God to him and his descendants (see Genesis 17:4–8). After what many considered to be a silence of two thousand years, this land has been reborn.

How could a remnant of scattered and persecuted Jewish people, who went through their darkest hour in Hitler’s Holocaust, suddenly regain their sovereign nation within their ancient territory? Not without divine intervention, for sure, although many Israelis today believe they did it all on their own. Let’s take a brief look at the modern history of this region.

On November 29, 1947, the General Assembly of the United Nations adopted a resolution requiring the establishment of a Jewish state in Palestine. The following is a portion of the Proclamation of Independence read by David Ben-Gurion on May 14, 1948:

“The land of Israel was the birthplace of the Jewish people. Here their spiritual, religious and national identity was formed. Here they achieved independence and created a culture of national and universal significance. Here they wrote and gave the Bible to the world. Exiled from the Land of Israel, the Jewish people remained faithful to it in all the countries of their dispersion, never ceasing to pray and hope for their return and the restoration of their national freedom.

“Our call goes out to the Jewish people all over the world to rally to our side in the task of immigration and development and to stand by us in the great struggle for the fulfillment of the dream of generations for the redemption of Israel. With trust in Almighty God, we set our hand to this Declaration on the Sabbath eve, the fifth of Iyar, 5708, the fourteenth day of May, 1948.”

And thus one of the greatest fulfillments of Biblical prophecy came into being. Israel is the apple of God’s eye and it needs to be ours as well.

God’s promise to once again gather and protect the nation of Israel is a declaration of His faithfulness and greatness, not Israel’s perfection. With this in mind, let’s look at some significant Old Testament prophecies regarding Israel’s dispersion and regathering.

Jeremiah, the weeping prophet, glimpsed through time and saw that Israel’s faithful, covenant-keeping God would once again offer divine protection to His people in the Promised Land:

“Hear the word of the Lord, O nations, and declare in the coastlands afar off, and say, ‘He who scattered Israel will gather him and keep him as a shepherd keeps his flock.'”
Jeremiah 31:10

We find three truths contained in this one verse from Jeremiah. First, it was God Himself who scattered Israel from her own homeland. Second, the same God who scattered Israel will regather her to her own land. And third, God will put a divine hedge of protection about her during the process.

With the theme of God’s grace and His faithfulness in mind, let’s back up and look at the Diaspora (the dispersion) of the Jewish people in history.

It is my understanding that Scripture tells us the Jews would suffer two major dispersions, or scatterings, followed by two regatherings.

The first scattering occurred in the years when the prophets Daniel and Ezekiel were exiled in the land of Babylon. This was also the period in which the Jews of the Judean kingdom were displaced from their country after Nebuchadnezzar destroyed the Temple, Jerusalem and the commonwealth (see Daniel 1:1-6). Daniel and his associates were kidnapped around 605 BC. The Jews began to return to the land in 538 BC (see 2 Chronicles 36:22-23; Ezra 1:1-4), and the Temple remained flattened until 515 BC (see Ezra 6:15), about seventy years after its destruction.

The prophet Daniel was held captive in Babylon—a foreign land with foreign gods and culture. In about their 63rd year of captivity, while meditating on the Word of God (see Daniel 9:2), Daniel received a revelation from the prophetic promises of Jeremiah:

“Thus says the Lord, ‘When seventy years have been completed for Babylon, I will visit you and fulfill My good word to you, to bring you back to this place.’”
Jeremiah 29:10

Daniel believed the word and declared it as revealed to Jeremiah—that at the end of seventy years of Babylonian captivity, the children of Israel would be released to return to their own land. Daniel also sought the Lord to reveal any obstacles to the prophetic promise being fulfilled (see Daniel 9:3-19). Daniel then responded to the prophetic word by confessing the sin of his people as his own. The verse that summarizes his confession is Daniel 9:19:

“O Lord, hear! O Lord, forgive! O Lord, listen and take action! For Your own sake, O my God, do not delay, because Your city and Your people are called by Your name.”

The fact that Jeremiah spoke accurately and Daniel later knelt on those words is an example of prophetic intercession at its best. God did precisely what His prophets said He would do! At the end of seventy years the Israelites fulfilled the prophecy of their first return to their covenant land. They began to rebuild the walls of Jerusalem.

Israel continued in many more years of faith, sin, repentance, revival and restoration, but the word of the Lord had been fulfilled and God had shown Himself true to His promise.

That was not the only dispersion and regathering prophesied by God’s watchmen. Isaiah 11:11-12 states that the Lord would set His hand a second time to recover a remnant of His people:

“It will happen on that day that the Lord will again recover the second time with His hand the remnant of His people, who will remain, from Assyria, Egypt, Pathros, Cush, Elam, Shinar, Hamath, and from the islands of the sea. And He will lift up a standard for the nations and assemble the banished ones of Israel, and will gather the dispersed of Judah from the four corners of the earth.”
emphasis added

Let’s make it simple. The Scriptures explain that there would be a regional dispersion followed by a regional regathering. Then there would be a worldwide dispersion followed by a worldwide regathering. When did the second dispersion occur? It began around AD 70 under the Roman general Titus, when the Jewish people once again fled their homeland and ran for their lives. For approximately nineteen hundred years, they had no political autonomy and were scattered to the four corners of the earth.

I love it when the purposes of God unfold right in front of our eyes! That is exactly what I see occurring in the Middle East today.

Little keys open big doors! Then what are the keys needed to unlock the promises of God? Jeremiah 31:7 perhaps summarizes better than any other verse the believer’s practical response to God’s prophetic invitation:

“Thus says the Lord, ‘Sing aloud with gladness for Jacob, and shout among the chief of the nations; proclaim, give praise and say, “O Lord, save Your people, the remnant of Israel.”‘”

This verse points out three important and distinct actions. They are the words proclaim, praise and say. The word say in this context refers to prayer, since we are exhorted through “saying” to talk to God. God gives us three successive keys to insert into the prison door on behalf of the Jewish people, to help deliver them into God’s destiny. These keys are the power of proclamation, the power of praise and the power of prayer.

Israel is God’s Prophetic Calendar that we need to watch, observe and pray over. Great truths are contained in these ancient prophesies of scripture with fulfillment in modern day times. And as we look to the great Feasts of the Lord, Harvest time is upon us. Let’s pray to the Lord of the Harvest for the greatest out pouring of His Spirit upon all of the descendants of Abraham. Come Again Holy Spirit!

Let the Holy Spirit tune your heart to heaven right now. May Elohim, the Creator and Supreme Being, give you the spirit of wisdom and revelation concerning His prophetic calendar for Israel, and may His heart for Jerusalem beat in your own as we help give birth to God’s purposes through prophetic intercession.

A Watchman on the Walls with You,

This article has been adapted from James Goll’s new book Praying with God’s Heart: The Power and Purpose of Prophetic Intercession, Chapter 8 on “Israel: God’s Prophetic Calendar.” If you want to learn more about how you can call forth God’s purposes in prophetic intercession, purchase your copy today!