I awoke suddenly out of a vibrant dream that was filled with lightning. (Although this happened years ago, I remember it as if it were yesterday.) 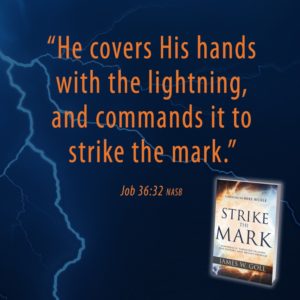 When I woke up from this intense, Holy Spirit-saturated dream, the whole room still crackled with God’s electric presence.

I lingered in that presence for twenty minutes or so before it dissipated.

As I lay there musing, What in the world was that about? I saw “Job 36:32” spelled out in large, illuminated letters that were two or three feet tall.

I turned on the light and found Job 36:32 in my Bible. I remember thinking dubiously that I rarely seemed to get anything out of the book of Job, but then I read this: “He covers His hands with the lightning, and commands it to strike the mark”(Job 36:32 NASB).

Lightning-fast, I made the connection. Lightning was “striking the mark,” just as our God-directed intercessory prayers do.

And everything fit together even better when I considered the huge role that such prayer had been playing in my life at that time. 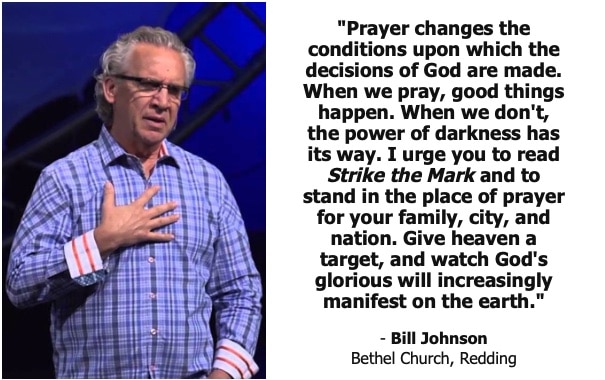 For starters, the dream occurred while I was staying in a suburb of Toronto on the last night of a Vineyard church conference called “Fire on the Altar,” at which I was teaching about intercessory prayer.

Prior to that, God had put me through ninety days of prayerful seclusion during which I had prayed in tongues for six to twelve hours a day.

I had been sequestered in my home for three months straight, not doing any public ministry, but rather focusing on praying and singing in the Spirit. By the end of that time, I had grown so accustomed to praying in the secret place that I did not know whether I wanted to come out and engage in typical ministry again.

Another connection did not become clear until a few weeks later, when what is now known as the Toronto Blessing began. Yes, the first evidence of that special outpouring of the Holy Spirit occurred at the end of the very next month following my dream.

I am convinced that what happened in Toronto could not have happened without the persistent, intercessory prayers of many, many people around the word, including mine. 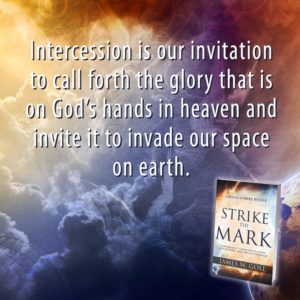 Collectively, I believe our intercession had released the flashing forth of God’s “glorious lightning” and directed it to hit specific targets of need.

It really happened just as the verse from Job says: “He covers His hands with the lightning, and commands it to strike the mark.”

We have been invited to draw God’s attention to specific places where He can intervene.

On the cross, Jesus already accomplished the ultimate answer to all of our prayers, but God awaits our specific invitation to come into each scene.

You may say, “I am not qualified for this. I am not an apostle…I am not a prophet…I don’t think I’m even very sharp.” But I say, “You are qualified.”

If you are a believer in the Lord Jesus Christ, He has given you both authority and power over the enemy.

He is waiting for you to follow Him as He uses your Spirit-breathed prayers to gain victory over the foe and bring blessings to His people! Are you ready? 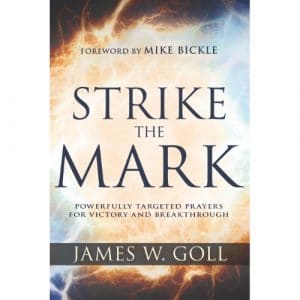 If you want to learn how to target your prayers for victory and breakthrough, then you’ll love James Goll’s NEW book Strike the Mark! When you purchase the book you will also receive 12 bonus video devotionals by James W. Goll that correspond with each chapter. Order your copy today and invite God’s glory to strike the mark in your family, city and nation!