Investing in the Generations – A Core Value from James W. Goll

Home>Recent Articles>Investing in the Generations – A Core Value from James W. Goll
Previous Next

Investing in the Generations – A Core Value from James W. Goll

God Himself always thinks and acts generationally. Therefore, each generation of Christians, and especially leaders, need to see themselves as a bridge that builds on the past, lives in the present, and plans for the future.

Part of the mind-set of a bridge generation requires recognizing and taking responsibility for passing on a solid legacy of faith and godly values to the next generation. Just how important is this “generational transfer”? One of our most critical needs today in the Church is that we renew our commitment to “generational transfer,” which is passing on to the next generation not just principles, theology, and doctrinal beliefs, but also passionate heart affection.

Each generation must learn to love God for themselves, and it is the responsibility of the preceding generation to teach them by modeling the Christ-life. This is the biblical pattern, not only in God’s dealings with man, but also in the patriarchs’ dealings with their children. It is a fundamental principle known as mentoring—spiritual fathering and mothering.

A Synergy of Generations

Synergy is defined as the condition where distinct groups work together in a cooperative arrangement in such a way that the total effect is greater than the sum of the individual effects. In other words, the group accomplishes more working together, than the individual members could achieve working independently.

The Church has long suffered from a “generation gap” where there is little genuine appreciation, understanding, or cooperation between the older, middle, and younger generations of believers. God wants to bring these generations back together—to infuse them with a common vision, a unified sense of purpose, and a recognition of their mutual interdependence.

Three generations moving together toward a shared goal can accomplish more than the sum of what each generation could achieve separately. This synergy of the generations is something that God promised He would bring about in the last days. I refer to this as the “convergence of the ages.”

God is relational by nature. Even His self-revelation to humanity as Father, Son, and Holy Spirit—one God in three Persons—reflects a generational perspective. God the Father gave His only begotten Son to redeem lost humanity and make salvation possible for everyone who believes. God the Son gave Himself to a small band of spiritual sons and imparted to them the Holy Spirit to dwell within them continually.

God the Holy Spirit empowers and enables believers to carry out the Father’s redemptive plan on a global scale. Completion of the plan requires that all “generations” work together as one. Father, Son, and Holy Spirit are co-equal, co-existent, and co-eternal in nature, but generational in relationship to mankind.

Running With the Vision

This is God’s plan for every person in every generation. God wants to do in each of us that which He did in His own Son. The Father’s great desire is to fill the earth with His spiritual children. This will happen not through a crash course in holiness. It is accomplished through each generation patiently and faithfully passing on to the next not only information and knowledge, but also wisdom, passion, integrity, faith, heart affection, and vision.

Each generation must learn to honor those who have gone before, the “pioneers” of the Church who have forged a path for their descendants to follow. I live for this. I pray for this daily.

This is one of the primary goals of my life – to invest what the Lord has given to me into the lives of others.

Joining of the Generations!

As we continue our 21-Day Campaign to raise Personal Support from James, thank you for reading the special letter above from James sharing on one of his core values: Investing in the Generations. We wanted you to also hear from some next gen leaders whom James has invested in over the years.

We asked these next generation leaders, “How has James’ ministry impacted your life?” We received the following replies from these choice emerging leaders.

“James Goll is an amazing man of God. His life and ministry has greatly impacted my life. Not only has his prophetic ministry impacted me at key moments, but his wisdom, understanding, character & perseverance have spoken more than words ever could. His friendship has been a deep encouragement & inspiration to me and my family.” – Matt & Stephanie Sorger

“‘You have had many teachers, but not many Fathers.’ This verse sums up James Goll to me. He is one of the most prolific teachers and authors I’m aware of and yet has taken time out of his life to pour into next gen leaders. I’m honored to be one of them. As a young believer, I was mentored by James by his resources, today I am privileged to sit at his table. There is no greater soil to invest, in my opinion, than James Goll and God Encounters Ministries.” – Ivan Roman

“James Goll has been such a blessing both to us personally and to Global Presence Ministries. As a papa in the faith, he brings great encouragement, blessing our entire apostolic network through equipping, training, and activating a generation to be about the Father’s business. James has a deep well of revelation and wisdom with great grace to break down the Word and make it simple. It has been a joy to be a monthly partner. James’ life and ministry truly is good soil for financial seed.” – Steven Springer

“James Goll’s life has been a real impact to me way before we ever met. His book, The Seer, helped me understand my particular prophetic enablement, as well as advance in it. Now that we are in relationship, I have been able to witness first-hand the grace he carries to father the next generation of seers, prophets, and leaders into the fullness of who they are called to be. His life and work is pivotal in this hour, because there are many teachers, but few fathers. Will you help this father in the faith raise up whole sons and daughters?” – Anthony Medina

During these 21 Days from Memorial Day on May 31st through Father’s Day on June 20th, we are asking you to consider giving a one-time gift or perhaps even become a monthly supporter for for James Goll’s Personal Support.

To contribute directly to James Goll’s salary, we have an option when donating to GEM to designate your gift to “James Goll Personal Support” — these funds go specifically to the underwriting of his salary and benefits. Would you join us in showing support for James?We want to bless and support James as he continues investing in the generations. If you would like to give to James’ Personal Support, you can donate by clicking here. Thank you so much!

Thank You & Blessings to You, 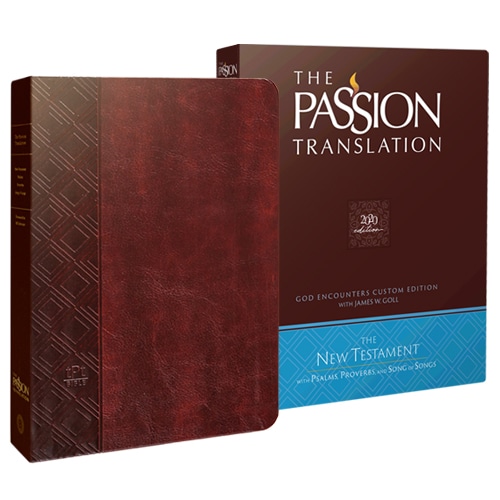 For every Donation of $50 or more designated to GEM’s “James Goll Personal Support” given during the 21-Day Campaign from May 31st through June 20th, we will send you a copy of the special God Encounters Edition of The Passion Translation Bible. This gift is for both USA & International donors and FREE Shipping is included!

(We will send your gift to the mailing address you provide in the donation form.)