God’s Challenge in Life’s Storms: “What Are You Going to Do About It?”

Home>Recent Articles>God’s Challenge in Life’s Storms: “What Are You Going to Do About It?”
Previous Next

God’s Challenge in Life’s Storms: “What Are You Going to Do About It?”

The Holy Spirit is offering “Storm Warnings” for those who have ears to hear. God’s challenge in life’s storms is being sounded. As we press into Him, He is pressing into us.

He wants to increase our capacity to detect His early warning signals.

Too often we are only “After the Fact Intercessors” instead of “Forerunner Discerners” who can cut off, lessen or delay attacks of the enemy.

Many of us have a history of being a Crisis Intercessors, who take a stand between the living and the dead. We need to become better Prophetic Intercessors who detect ahead of time the plots and schemes of the evil one.

On a global basis we are facing the coronavirus showing no signs of respecting borders of nations. It has leap frogged from China to parts of Europe, the Middle East and North America.

But what might be worse, is the spirit of fear that we have allowed to permeate major parts of society. Fear of death, fear of traveling, fear of being friendly, fear of living…

Society is on the verge of a pandemic of fear! I have stated for years, “Fear paralyzes, and faith propels!”

This week, in my hometown of Nashville, TN, our comfortable way of living was rudely interrupted with horrific tornadoes leaving over 20 people dead, hundreds of houses and businesses destroyed, schools closed and electrical power outages far and wide.

Within minutes the lives of thousands of people were shifted into altered states with the appearance of living on another planet.

As I have walked and sat among the ruins, it’s as though I can hear the very groanings of the earth for help, for deliverance, for salvation to come.

But, more than that, I can sense the pain of the people questioning God. “God, where were you?! What are you going to do about this?”

Like it or not, raging storms with winds and waves come against all of our lives; believers and unbelievers alike. This truth is driven home to us by the very words of Jesus.

Winds and waves comes against every house at some point and time in life. The issue is not if, the issue is when.

Greater than that, the issue is how are we going to respond to the storms of life.

The foundation of the house determines the outcome.

A God Encounter: How will YOU respond?

This week I, along with many other leaders, had the honor of participating with Cindy Jacobs of Generals International for a Global Day of Prayer concerning the coronavirus crisis.

In a previous exchange with Cindy, I recalled a word from the seer prophet Bob Jones. So, on the prayer call, Cindy, my friend and prophetic intercessor, asked me to share that God encounter.

Some years ago, we were dealing with the spread of SARS and later the Bird Flu.

Bob Jones turned to the Lord and said, “God, what are you going to do about it?”

The Lord answered back, “I have already accomplished my part at the cross of Calvary. The real question is, “What are you going to do about it?”

Let me repeat the question from the Lord, “What are you going to do about it?”

The Global Day of Prayer was already scheduled for this last Tuesday, March 3, 2020. And this was the very same morning that the storms hit Nashville, TN.

I was actually not yet fully aware of all that had occurred in the middle of the night. I knew there was a furious thunderstorm as I had observed flashes of lightning strikes piercing through my bedroom shades.

That morning, I was awakened out of vivid dreams where I was preparing a place of safety for my family and I was teaching others how to build an ark of His presence for the preservation of their families.

In the dream, I appeared to be a modern-day Noah, teaching from a blueprint on how to build an ark that could withstand the tossing and turning of strong winds and waves—as it was in the days of Noah.

Then I was awakened by the voice of the Lord in my bedroom, “What are you going to do about it?”

Remember, I did not yet even fully know what had just occurred that night in our city. I can still hear and feel the rumble of that word resonating within my being.

“What are you going to do about it?”

Interesting, the Lord spoke to me the very same word He had given his servant Bob Jones some 15 years or so ago. Now in turn I present that word to you, “What are you going to do about it?”

Yes, Storm Warnings are being released.

Times of shaking will become even more severe as the end times unfold.

God’s Word and His character are like a measuring line; whatever does not match up with it will be shaken.

We are God’s Hope Solutionist!

Each storm in life requires a different response, but the responses all have something in common—desperation.

To be Hope Solutionist means that we must arise above the Storm Clouds and receive the Holy Spirit’s redemptive blueprints!

I have found there are three different major types of storms in life:

God has a solution for every storm!

Instead of, “God, what are you going to do about it?! Perhaps you can hear His voice thunder in your being as I did this week.

The question demands a response. So I leave you with God’s challenge in life’s storms, “What are you going to do about it?” 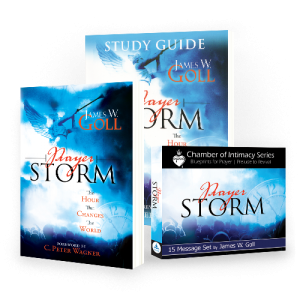 If you enjoyed the article “God’s Challenge in Life’s Storms: ‘What Are You Going to Do About It?'”, then you’ll love James Goll’s Prayer Storm Curriculum Kit! This class lands you directly inside the exciting worldwide call to consistent, persistent prayer. You will be immersed in stirring up your own personal prayer storm that involves four expressions of prayer for: revival in the church, the greatest youth awakening ever, Israel – and for all the descendents of Abraham, and God’s intervention in times of major crises.