Today I was given a dream in which I relived an actual event (and powerful spiritual encounter) that took place almost 30 years ago. It is rather dramatic, but don’t let the details overwhelm you to such a degree that you miss the main point of the visitation I am about to share:

The Encounter at Longview Lake

It was a quiet evening in May 1989. Michal Ann and I had just returned home from a meeting in nearby Kansas City. I was restless and we both knew it. I had to be alone with the Lord; something was up. So Michal Ann blessed me and I got into our car and went on a drive. It was about 9:00 p.m.

I could hear the still, small voice of the Dove of God speaking in my heart. He would say, Turn here. Turn right. Go there. His presence was very near. Eventually I drove up to a manmade, recreational body of water called Longview Lake, not far from our home in South Kansas City. Even the names of the roads leading there seemed prophetic: Longview Road and Highland Drive. (And that night I would experience a long look at a higher place into which Jesus wants to bring His Body.)

As I drove, I came to part of the lake that I had never seen before. I parked my car and stepped outside. Immediately to my left I saw a road that looked familiar. I had seen that gravel road earlier that day in a vision. So I proceeded to walk down the narrow road, which led to an arm of land jutting out into the lake. There, at the end of this path, was a concrete block building with a high wire fence around it. It seemed to be some kind of a powerhouse or generator.

Then something—or maybe I should say Someone, that wonderful Guide and discloser of truth, the Holy Spirit—seemed to take over. I heard His gentle voice within me say: Walk around the powerhouse seven times, praying in the Spirit. So I obeyed.

No one was out on the lake that night—no boats, no fishermen. It was a beautiful, serene, still night, even though it had rained recently. I walked around once, praying very quietly in the gift of tongues. I walked around a second and third time. As I continued on my journey of obedience, I found myself praying more loudly with each round. By the time I was walking around for the seventh time, I was praying loudly in the language the Holy Spirit gave me.

When I had completed my seventh trip, I heard His voice again: Walk around the powerhouse an eighth time, declaring into the heavens.

When I had completed my fourth proclamation, I thought perhaps that was all I was to do that night, and I started to turn and walk away. But the voice of the Dove came into my heart again: “I want you to go down to the bank of the muddy lake below and strike the waters.”

Off I went, sauntering through the weeds. Sure enough, along the path I saw a large branch from a tree. I picked it up and Jeremiah 23:5-6 lit up inside me. There is One who is called the righteous Branch, I thought as I continued making my way down to the muddy bank of the lake below.

When I arrived there I saw a wood plank resting on the muddy bank of this manmade lake. I stepped onto it. While I stood there with the branch in my hand, the Holy Spirit said, “Another fisherman has stood here before you.” (Hold that thought; I will return to it later.)

Then, as I stood on the wood plank with the branch raised high in the air, I heard these words: “Strike the waters.”

I lowered the branch onto the still water directly in front of me. Then something strange began to take place. Dark, shadowy lines began to form in the middle of the lake, coming toward me. These lines began to take on the shape of waves. I continued to watch as the water swept over my feet on the shore. The atmosphere around me was charged with fear. “Lord, I’m afraid!” I cried aloud.

t that very moment the waves ceased. Instantly the lake became once again like a sheet of glass. I was startled, amazed and frightened all at the same time. The persistent Lamb spoke into my being again: “Release a song of love to the Holy Spirit in order to woo the return of His presence.”

I stood on that wood plank and sang out a song of love to the Holy Spirit, inviting His presence to return. Then I heard it again: “Strike the waters.”

As I lowered the branch the second time onto the water immediately in front of me, dark, shadowy lines again appeared in the middle of the lake and rippled toward me. They grew in intensity, power and thrust. Waves of water began to pound onto the shore and around my feet. This time, however, the atmosphere around me was charged with joy, faith and excitement. I stood there praising the Lord aloud, celebrating and enjoying His presence.

When the waves subsided and the manifest presence of God abated, I decided to start back up the gravel road and head home. Then He spoke to me for the last time that night: “All I have ever required of My people is two things: that they believe Me and that they do whatever little thing I have commanded them to do.”

Then He personalized it, imprinting His message into my consciousness: “And all I am requiring of you is two things: that you believe Me for the beginning of this great visitation and that you obey whatever little thing I command you to do.”

I walked on up the road, got into my car and drove home. It was late now, and when I arrived home, Michal Ann was already asleep. As I got into bed, the anointing of God’s manifest presence began to wear off.

Now what was that? I wondered. Throwing up one of those feeble “Help me, God!” kinds of prayers, I dozed off.

Other than my wife, I told no one about the encounters. Then that following Saturday morning I received a phone call from the seasoned, prophetically-gifted seer named Bob Jones. I will never forget the conversation.

“I saw you in a vision this morning,” he remarked. “You and I were walking down a gravel road together. It led to some kind of powerhouse. Then waves of water began coming up on our feet. Does that mean anything to you?”

I sighed and responded quickly, “Yes, it means two things to me. One, I am not crazy, and, two, it confirms the meaning of a profound divine encounter I have just experienced.”

I proceeded to explain to Bob what had transpired and thanked him for his confirming word. Good old Bob acted like he knew almost all the details, it seemed, before I got them out of my mouth! I remember he told me that this was a vision that would happen in my lifetime and that it would take place later in life.

But what did this unusual encounter mean?

Just as I lowered the branch two times onto the water at Longview Lake, followed by two releases of waves, so I am convinced that there are two great waves of God’s manifest presence and glory coming to the Church in this generation.

The first is a wave of His presence restoring the fear of the Lord. Oh, how we need this fragrance of the perfume of God to be splashed onto the contemporary Church! It has been a missing ingredient in a generation that has sought the hand of God (His blessing) at times, but not the face of God Himself.

This magnificent first wave of grace will be followed, I believe, by an extraordinary surge upon surge of power evangelism flowing across the nations. As the fear of the Lord is restored to the bride of Christ, the power of God will flow as rarely seen since the days of the book of Acts. We could be on the verge of a tidal wave of His presence. The combination of these two great movements will usher in a great end-time harvest for the Lord’s glory. O Lord, let it come!

The first time I described my experience at Longview Lake publicly (I told you I would come back to this), a man came up to me at the end of the church service who had never been to that church before. “I know that wood plank you were talking about,” he told me. “I was the fisherman who stood there before you.” The spot, it turned out, was his favorite fishing hole. He had stood on that wood plank before I ever knew it existed.

I got to pray with this man to accept Jesus as his Savior that very morning. This codger of a real-life fisherman gave his heart to Jesus. Yes, the Lord will indeed make us fishers of men!

The reality of my experience at Longview Lake comes down to a few simple words: “All I have ever required of My people is two things: that they believe Me and that they do whatever little thing I have commanded them to do.”

How many of us are waiting for God to tell us some “big” thing to do? Sell all you have and go to the tribal peoples of Nepal. That might be a true, authentic word for certain believers, but do you get my point? Even if you feel that something God is asking you to do is silly or insignificant, obey the impression and watch the Holy Spirit move.

But how many of us receive words as suggestions and not commands? What are the “little” things God has commanded you to do? Did you hear these commands? Does it sound as though the “Man Upstairs” thinks He is God and has come to rule your life? He has. He has come to take over. The good news is that His will is good.

Our little acts of kindness can be a big token of God’s love to someone else. Let’s do our little stuff, then, so He can do His big stuff. Remember, “All I have ever required of My people is two things: that they believe Me and that they do whatever little thing I have commanded them to do.” 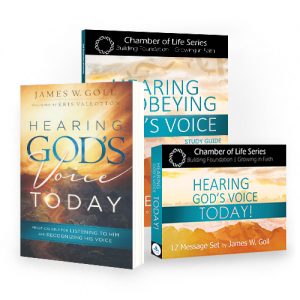