Home>Recent Articles>Can a Nation Be Born in a Day? (Hint: Yes!)
Previous Next

Can a nation be born in a day? When God asks an outrageous question, He already knows the answer. And usually, it is to make a strong point.

In this case, certainly one point is—“Is anything impossible for God?” And the obvious answer to any student of God’s Word is an obvious, “No!”

But perhaps another more important point in the case of this question posed by God is—“Do I keep My promises?”

“Who has heard such a thing? Who has seen such things? Can a land be born in one day? Can a nation be given birth all at once? As soon as Zion was in labor, she also delivered her sons.” Isaiah 66:8

A Nation Born in a Day

I was born in 1952, only four years after the rebirth of the “land,” the nation of Israel, which occurred in 1948, so I can almost say this happened in my lifetime.

People worldwide have asked me, “In the past fifty years or so, what is God’s greatest prophetic event?”

I always give the same answer: The greatest prophetic occurrence in the past hundred years is the restoration of the Jewish people to their Land of Promise, which today is the country of Israel.

Over the years, the word aliyah (“ascent”) has become very dear to Jewish people and believing Gentiles alike, as prophetic Scriptures about the regathering of the Jewish people from the ends of the earth are fulfilled right before our eyes.

Aliyah, simply put, means to go from a lower place to a higher place—the process of returning to the homeland.

I believe that, throughout this book (The Mystery of Israel and the Middle East), the Holy Spirit is going to open your eyes so you realize that the God of the Bible is at work even in the crucible times for the Jewish people, ordaining that they would come from the ends of the earth to be restored, returned to their homeland.

Isaiah 11:11–12 says, “Then it will happen on that day that the Lord will again recover with His hand the second time the remnant of His people… And He will lift up a flag for the nations and assemble the banished ones of Israel, and will gather the dispersed of Judah from the four corners of the earth.“

This prophecy is extremely important. Let me add that for every verse I give throughout this book, I can give many more that complement it. The Word of God confirms itself again and again, especially concerning His children.

The well-being of the Jewish people has always hinged on the balance of the level of their obedience to God, His faithful promises to their ancestors and His eternal purpose and love for them.

In general terms, when God’s people obey Him, they prosper. When they do not, they are judged.

This principle comes from Deuteronomy 28, and we see it repeatedly in action in the history of Israel (for example, in Judges 2:6–23). This biblical law of sowing and reaping still applies, even under the grace of God received through the finished work of Jesus Christ.

Over the millennia, Jacob’s descendants have suffered greatly and have been greatly blessed as well. British Bible teacher Lance Lambert says of them:

“No other nation in the history of mankind has twice been uprooted from its land, scattered to the ends of the earth and then brought back again to that same territory. If the first exile and restoration was remarkable, then the second is miraculous. Israel has twice lost its statehood and its national sovereignty, twice had its capital and hub of religious life destroyed, its towns and cities razed to the ground, its people deported and dispersed, and then twice had it all restored again. Furthermore, no other nation or ethnic group has been scattered to the four corners of the earth, and yet survived as an easily identifiable and recognizable group.”

The first exile took place under Babylonian rule. As for the second great exile, Roman forces serving under the Roman commander Titus destroyed and dismantled Jerusalem in August AD 70, exactly as Jesus prophesied 37 years earlier. The Romans killed 600,000 Jewish residents and deported 300,000 more to locations scattered around the Empire.

Sixty-five years later, the forces of Roman Emperor Hadrian crushed the last Jewish uprising, led by Bar Kokhba. Those Roman forces hated and persecuted Jewish and Gentile followers of Christ. Some observers believe this might have helped plant early seeds of anti-Semitism in the fledgling Church.

Hadrian’s hatred for the Jews burned so brightly that he changed Jerusalem’s name to “Aelia Capitolina” (his given name was Aelius) and declared it “a Roman city forever which no Jew could enter under pain of death.” He built a temple to Jupiter on the site of the former Temple where sacrifices had been made to Jehovah. Then he renamed the land “Syria Palaestina” (Latin for Philistia).

Caesar overlooked an important detail: Unlike the powerless gods of Rome, the God of Israel was and is alive and well. The Jewish people in Jerusalem and Judea were recaptured, died violent deaths, or were scattered to distant lands. This second dispersion following the death and resurrection of Jesus the Messiah lasted far longer than the first. It would not end after five hundred—or even a thousand—years.

Jerusalem: The Center of God’s Heart

The devastated city of Jerusalem became the most contested urban real estate on earth, as for two thousand years various nations, empires and religious factions battled for its possession.

All the while, its builders and original residents— the Jewish people—were forced to seek refuge in Gentile cities and nations around the world, which none could call home. That all changed in one day, as I discuss in great detail toward the end of this chapter. Eighteen hundred and thirteen years after the destruction of Jerusalem under Hadrian, a new nation emerged from the birth pangs of World War II and the horrible Holocaust, just as Isaiah prophesied (see Isaiah 66:8).

Before every birth must come birth pangs. The Scriptures clearly predicted the two great dispersions and the persecutions they represented. They also describe the regathering of the Jewish people and the rebirth of Israel. 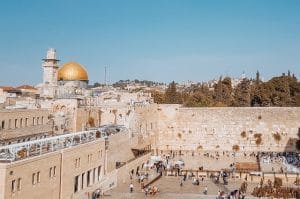 Yes, Jerusalem is in the center of God’s heart and attention.

It is the only city mentioned in the entire Bible for which all peoples in all generations are to pray by name. The existence of Jerusalem under Jewish rule is a modern-day miracle—an authentic fulfillment of the prophetic Word of God. Indeed, God’s jealousy rests over the destiny of this great city. Prophecy is written about this ancient, walled dwelling place.

Friend, this is our story. This is God’s story. I want you to see the fingerprints of God throughout world history as well as throughout His Word. God is faithful who promises and keeps His promises.

Israel is the only nation on earth that was born in a day.

The supernatural intervention of God prepared the ancient homeland for His displaced covenant people, bringing them back to their land and birthing their nation in a day.

Truly God is a covenant-keeping God and He is faithful in fulfilling His promises.

If you want to read the full account of HOW God fulfilled His promises to Israel by restoring her as a nation, I encourage you to purchase my book,

Holy and mighty God, I marvel at the details of Your ways. I declare that Your Word has not returned empty and void, but You have watched over Your Word to fulfill it. You brought forth a homeland for Your covenant people. I declare, therefore, that the prophecies of Isaiah and Jeremiah are true, and I rejoice in their fulfillment. Help me to celebrate and pray for the fulfillment of all your promises to come. Amen and amen.

This article is adapted from Chapter 1: “The Birth of a Nation” in The Mystery of Israel and the Middle East book by James W. Goll.

If you want to read the full account of how God fulfilled His promises to Israel by restoring her as a nation, then you’ll love James W. Goll’s new book The Mystery of Israel and the Middle East! Along with your book purchase from God Encounters Ministries, you will also be emailed 12 bonus video devotionals by James W. Goll, one to go along with each chapter of the book! Order your book today and begin aligning your heart to what is important to God’s heart!